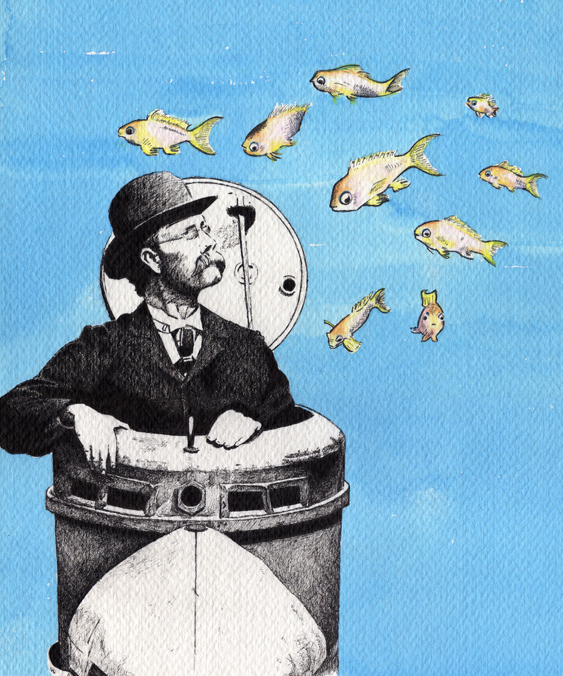 The nation was left gasping for air as the "Irish Merman," John Phillip Holland - creator of the first submarines - was revealed as a TERRORIST!

Yes, folks, the US Navy admitted today they had no idea JP - as he was known by his fanatical friends - desired nothing more than the willful chaos of an unkempt beard. And, of course, Irish freedom from their English overlords. Yes, just like the submarines he built, JP led the majority of his life hidden beneath the surface with one, occasionally monocled eye on matters of the world. His front? An unassuming business called "The Electric Boat Company," which authorities believe was developing militarized submersibles for the Irish freedom fighters of the infamous Fenian Movement. Indeed, even Mr. Holland's manicured mustache is under investigation, as it now appears to be nothing more than a clever underwater breathing apparatus painstakingly disguised as handsome facial hair.

The story that has thrilled our country's very soul does not stop there. The year is 1879. The month? May. JP Holland secretly commissions the construction of the Fenian Ram - a torpedo-shaped underwater deathboat - from Delamater Iron Works. Our sources say he would not divulge the boat's intended use, nor the backers, yet paid $20,000 in cash - an astronomical sum by standards of that day - from the Fenians' Skirmishing Fund. Then, throughout the construction, the Delamater shipyard recorded the visits of "strange dignitaries" from Ireland, Sweden, Russia, Italy, Germany, and Turkey - all mustachioed.

There you have it, folks - the most sensational crime to grab the headlines. And now, the nightmarish truth at long last - John Philip Holland: submariner, terrorist, leprechaun.