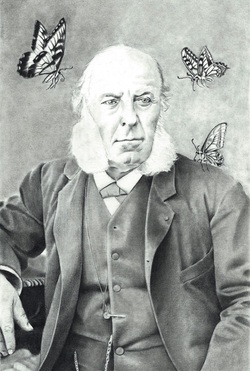 Martin M. Martins, fourth earl of North Northbridge, hated his family. He hated his lazy brother, his humpbacked sister, his dead father, and his dying mother. He also hated his house, most shoes, and the color green. He hated that he hated his stupid breakfast because he knew he had to eat it or his dying mother would get after him (again) for hating everything in his world, which was, Martin M. Martins thought, a typical example of her insufferable penchant for over-exaggeration. "I do not hate everything, mother," he would hiss at the bed-ridden woman through his wooden teeth (the real ones fell out because he hated brushing), "I simply do not understand why one should abase oneself with fictitious happiness when said emotion is, as I've told you before, a construct born of our unwillingness to admit that there is no such thing as love." At this point, his mother would usually tell him to "Go shit in the sea, you sour little man," which only reminded him how much he hated being little.

If there was one thing which Martin M. Martins, fourth earl of North Northbridge, hated more than anything else in the entire world, it was shopping. Nevertheless, shop he must, at least for food, such as eel, which he hated slightly less than other food, such as rabbit. In fact, he was actually looking forward to a nice boiled eel served with a side of pickled cabbage when he walked smack into a woman older than his hated mother, with skin drier than his hated father, a back humpier than his hated sister, and an eye lazier than his hated brother. "Get the hell out of my way, you ruddy crone," he grumbled as unpleasantly as he could. Yet, despite the gypsy's warts and fleas, Martin M. Martins' face twitched into what might pass as a grin of genuine joy for the old witch smelled of cabbage - nay, pickled cabbage. And though her years might be as long as her crooked nose, the hag's eyes were as keen as a headsman's axe.

"Ye codgery ol' bag'o'hate," she hissed at him, "Be ye so 'fraid o'love and happ'ness ye cannae admitit t'yer lonesome self?" She raised a skeletal finger, knobbed, gnarled, and twisted as the devil's horny backbone, fixing the hateful man in it's bony sights, and pronounced her curse: "Yer joy shall evermore follow ye 'round, undisguis'ble, bright as the day is long." She then turned from Martin M. Martins, fourth earl of North Northbridge, who was so relieved to be rid of that hated she-devil that he actually did allow himself a full smile (though it looked more like a grimace, I can assure you). No sooner did his face crease than, to his surprise and what would turn out to be his eternal consternation, a butterfly, bright as the day is long, alighted on shoulder.