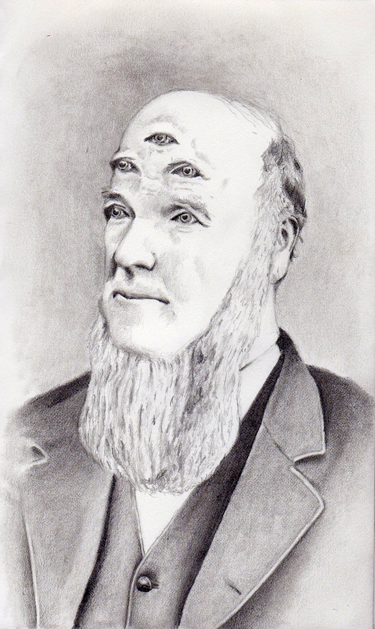 Dr. Ulysses Funfauge-Oldsmann was one of the foremost pioneers of his bygone age. An intrepid world-traveller who risked life, limb, and reputation to gather specimens of far-flung exotic talking animals, such as the renowned "Quipping Quail" and the notorious "Larking Lark." Despite numerous accusations of fraud from the liberal media, Dr. Fünfauge-Oldsmann remained respected in his field due to his famously meticulous field notes within which the good doctor sought to capture not only the life and mating habits of his subjects, but also their feelings, smell, and, indeed, the quality of light in their indigenous habitats.

A curious man, Dr. Fünfauge-Oldsmann was never seen without his signature bowler hat, unless in India where he swapped the haberdasheries of the west for the bazaars of the east, outfitting himself in a flamboyant purple turban. Combined with his penchant for eating raw crickets and his uncanny powers of flight, the inevitable rumors began to swirl that Dr. Fünfauge-Oldsmann was not of this earth. One persistent piece of particularly outrageous speculation was that Dr. Fünfauge-Oldsmann was hiding a half-dozen eyes under his hat. We are pleased to announce that this malicious gossip is blatantly false; as evidenced here in the only known portrait of a bare-headed Oldsmann, the doctor clearly has only three additional eyes.