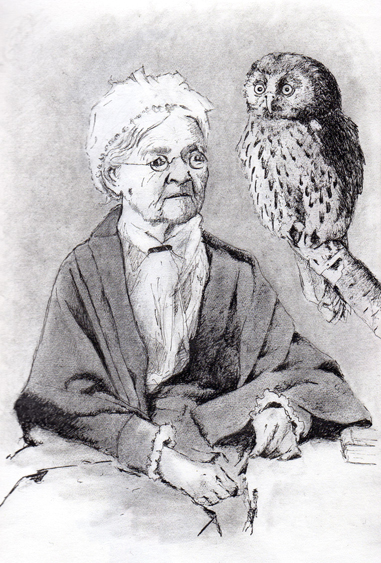 The Tragic Life of Emmeline Hughes

Emmeline Hughes was born in Plymouth, Massachusetts, the eldest daughter of a prominent tallow merchant from Swansea. Her mother died giving birth to Emmeline's youngest brother, Owen, and, what with her father's trade routes keeping him criss-crossing the Atlantic, Emmeline, at the tender age of 14, was left to raise her three brothers. Hughes Senior rarely visited, though kept his family well-stocked on exotic candles, scented soaps, and medicinal salves. After her brothers went to college, Emmeline worked for a time as a clerk in her father's shop and it was there that she met Humphrey Baker, a spectacled baker, to whom she was engaged within the year. Their engagement was a happy one, full of poetry - of which Emmeline was particularly fond - and picnics in the woods - of which Mr. Baker was a keen fanatic. Then, in 1861, Humphrey was conscripted by Union forces and killed in the First Battle of the Bull Run.

Emmeline retreated into herself, reading and rereading old letters and poems from her deceased betrothed on now-solitary walks to their favorite picnic spots. Gossiping spinsters claimed Emmeline even kept a sack of flour in her bed to remind her of her baker beau. Then, exactly one month after his death, an owl appeared to Emmeline in a grove where she had once picnicked with Humphrey. Curiously, the owl followed Emmeline home, perching itself outside her bedroom window. It was only then that Emmeline began to notice this owl's particular quirks; chiefly, striking rings around its eyes which resembled Mr. Baker's spectacles and an unnatural love of pastries. Emmeline became convinced that the owl embodied the spirit of her lost lover and took the bird in, fattening it on a steady diet of pies and calling it "Humpy" after the late Mr. Baker. Humpy lived quite contentedly with Emmeline for twelve years until he too passed, though Miss Hughes, who was to remain a bachelorette til the end of her days, had the animal stuffed and mounted on a perch beside her window so Humphrey's spirit could forever gaze upon those woods he so loved.