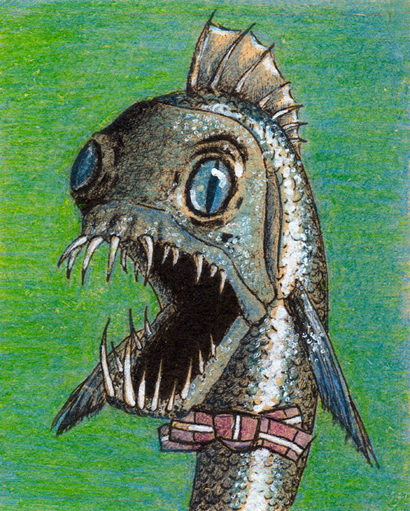 Deep in the depths of the vast Atlantic Ocean lives little Timmy the Viperfish. Timmy was a typical child of the '40s - mother, father, and 3.3 guppies all living a God-fearing, nightmare-inducing life. Little Timmy didn’t quite fit the mold of the other Viperfish his age and for lack of a better word was considered a little “different.” For one thing he was an avid collector of bottlecaps and other rust covered debris that found its way to the bottom of the ocean - a hobby that brought upon the mockery of his peers. Also, his custom of being attired by his mother, Wanda, led him to be ostracized by the other guppies, as did his irrational fear of the dark. Indeed, little Timmy would often ignite his luminescent photophore at the most importune moments in order to light his way earning him the inauspicious nickname "Rudolph."

Instead of confronting these schoolyard bullies, little Timmy typically swam to the safety and comfort of the family kelp garden, where he would help his mother tend her decorative seaweed. One such evening, while little Timmy was savagely ripping apart a crunchy dinner of a small, helpless crustacean with his fearsome maw, one of his baby teeth dislodged in the doomed critter's spinal column, and Timmy was forced, for appearance's sake, to wear a false tooth for his school picture. It is difficult to tell, but the fraudulent fang is his second incisor.